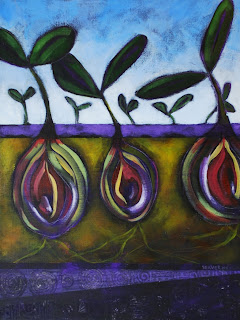 Becoming, 18 x 24, mixed media
Elizabeth W. Seaver
And what fun it was to add color back in and to imagine what seeds might look like as they are gathering all their creative matter to produce the flower or fruit of their kind!

The growing season is my favorite time of year.
Posted by Elizabeth Seaver at 4:13 AM 6 comments: 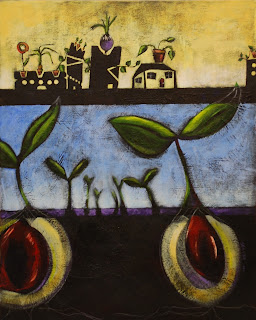 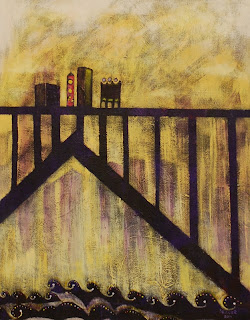 Both of these represent where the train went off the track, so to speak, in my quest to push the limited palette!  Color crept in.  In these two paintings I added quinacridone red, phthalo blue red shade, and cobalt blue to the hansa yellow, quinacridone gold, dioxazine purple, white and black that I had been using.  And, there I stayed for the next set of works I completed.  In fact, I do not think I am done yet with this combination.


I just finished a week of summer camp in my studio.  Let me tell you, we (my son, Matt, and Betsy Glassie, another artist at LibertyTown and I) took them on a mixed media journey.  I think we wore them out!  I know they did the same to me--but it was great fun with great kids. We're doing it again this week with a different group of campers.

I'm ready, now that I've got my camp legs under me!
Posted by Elizabeth Seaver at 6:45 AM 6 comments: 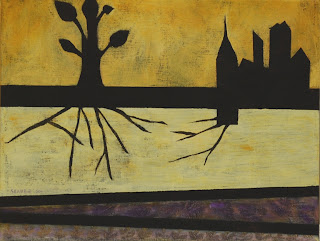 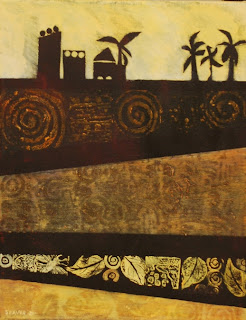 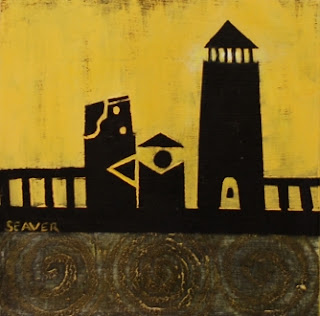 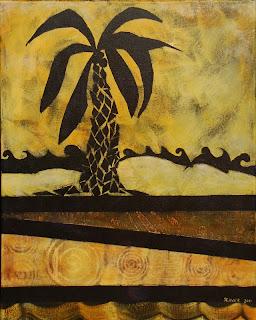 In Time, mixed media, 16 x 20
All the above works by Elizabeth W. Seaver
In these four works I continued to "ring changes" on the limited palette I had chosen: hansa yellow medium, quinacridone gold, dioxazine purple, white and black.  I toned the canvas with the deep purple, then placed tape of various sizes to delineate the underground layers.

Then, using tape and other sticky films I created the images that I wanted left behind when I began to paint over the dark under-painting.  I discovered that I could create the impression of rough, mysterious underground places such as rock or fossil or dirt by dry-brushing over impressions made with modeling paste and my block prints.

If you know me and my previous work at all, it will not surprise you that it didn't take long before color began to creep back into these simple pieces.  Stay tuned for the transition.....
Posted by Elizabeth Seaver at 6:12 AM 5 comments:

Trio and Back Tracking 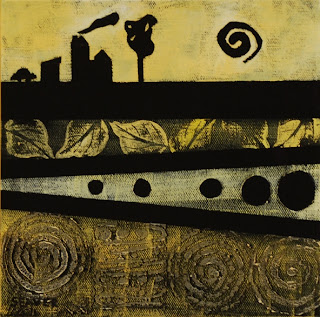 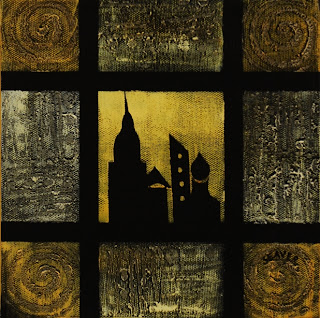 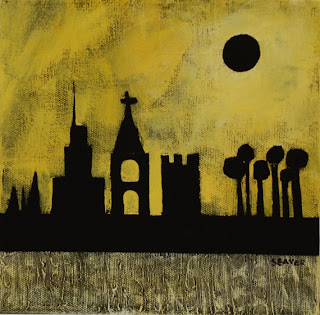 I painted these three at about the same time--early in my latest series of experimenting with a limited palette (hansa yellow med., quinacridone gold, diox. purple, black and white), toning the canvas with a deep purple and then masking areas with tape and contact paper.  I love the square gallery format.  They are not necessarily meant as a triptych.

The layering underground aspect of the painting derives in part from my early love of archeology and curiosity about what is below our feet (way below).  I have loved rocks and fossils from an early age, always keeping my head down looking when in an area where they were likely to be found.

The textures in the paintings were made by printing my hand-cut blocks smeared with modeling paste.  At first, I used a brush to apply the paste onto the blocks in a stenciling motion, but now go back and forth between that and applying the paste to the canvas with a palette knife and printing and drawing in it.

The last couple of posts have been later works in this same series when I began to go back to a broader color palette, though still a fairly limited one.  But I did do 12 or 15 works in the limited palette and found myself wishing I had showed those more fully.
Posted by Elizabeth Seaver at 2:07 PM 8 comments:

This is work in progress.  I'm still planning to bring up the lights for more contrast.  It is painted around the sides on a gallery wrap canvas, 24 x 24, and is a mixed media piece.  Still unsure of a title--the working title, courtesy of my son, is Dahling, You Look Radishing. 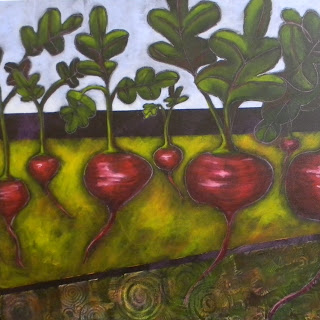 by Elizabeth W. Seaver
I'll take a better photo when I finish the job!
Posted by Elizabeth Seaver at 5:47 PM 4 comments:

Too Close for Comfort 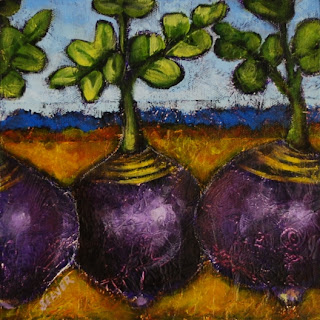 Too Close for Comfort, 8 x 8, mixed media
Elizabeth W. Seaver
SOLD
Some of my mysterious root vegetables...you decide what the title means!

This is painted on 1.5" canvas, so the painting continues on sides, top and bottom.  I've really enjoyed painting on those canvases recently--a nice change from framing.

It has taken me such energy to live my life over the last couple of months, that I haven't had any stuff left to write about it.  So, with a little rest under my belt, and a renewed intention to blog, I've decided to do a top ten list of the happenings in my life over the last little while.  First, personal ones: 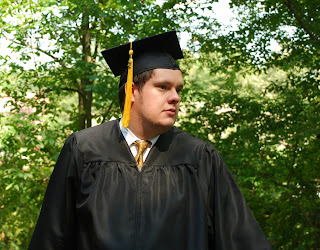 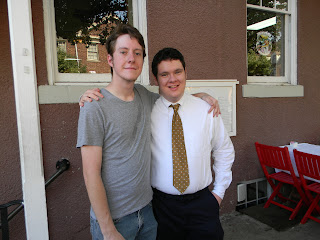