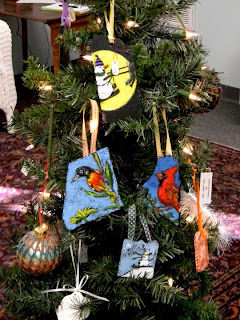 For several years I've painted small pieces of slate which come from the portion of roof demolished when our church went through its most recent renovation. I've pictured six of them here that I turned into ornaments, though in the past I have made pins and wall plaques as well.

My favorite subjects are snowpeople doing various things like fishing, singing, skiing and kayaking. Or it will surprise you--birds. But this year I've added cats. The one in the top picture was my favorite--and it sold this morning to people I know and like and have lots of cats, so it's okay. And those of you who know me, know I am not usually sentimental about my work. 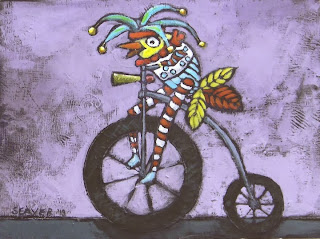 "Bliss," thought Armand. He cycled around the three rings of Humbolt's Harrowing Circus keeping tabs on piles of poop deposited by Erma the Elephant and the tiger triplets, Hocus, Pocus and Dorcus. Next act, he'd be spotting Boomer the Bear and the snooty dancing horses. Armand didn't mind who was pooping. He loved his job.

The seats were full. Cannon fire in the middle ring made the whole arena shake and filled it with smoke, turning it into hazy perfection. And just because Armand had Poop Detail, the least mysterious job in the whole circus, didn't mean he loved any less the thrill of the ride, the riot of calliope music, and the roars, sighs, oohs and ahhs from the ticket holders.


Whoops--Erma let loose a steamer. He swung by the curtain shielding the acts waiting offstage for their cues. "Surely and Pete, you're on. Big plop dead center stage left," Armand called.

"Aw, man! I'm getting tired of this s**t," Surely whined to Pete, who never said anything. Pete always agreed with Surely. It was easier that way. Pete nodded leaving her behind the curtained area. He moved towards Erma's disgrace: cartwheeling, back flip-flopping, ending with high-flying round-offs. The crowd laughed and clapped. Pete took the pooper-scooper, size large, off his belt, grabbed the pile and flipped it into a large receptacle at the completion of a thrilling set of acrobatics.

Armand watched with envy--ok, maybe there was one job he wanted more than Poop Spotter-- Acrobatic Poop Scooper Clown.

"Tomorrow, I'll start to work on my cartwheel," Armand resolved. "Surely--she can be replaced."

Posted by Elizabeth Seaver at 10:38 AM 6 comments: