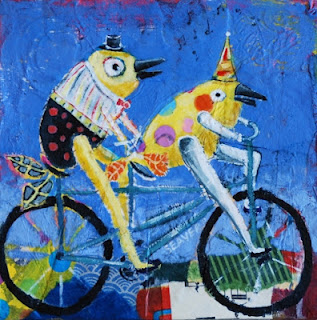 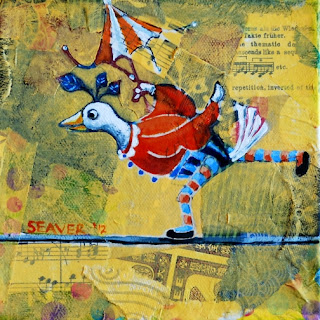 As a young bird, Braeburn spent lots of time standing on one foot, much to the consternation of his mother and father.  They encouraged him to fly when his brothers and sisters learned, but he declined to do it.  His parents even hired a private flight instructor for Braeburn, but Mr. Billmore gave his notice after just two lessons.

Mr. Billmore reported "It isn't that Braeburn can't fly; he can.  Braeburn doesn't want to fly, except on a trapeze, maybe."

Indeed, Braeburn had his dreams firmly fixed on the big top life, and no one could make him change his mind about that.  His parents just shook their heads; the neighbors, it must be said, gossiped about what a strange bird Braeburn must be to turn out so differently from all those nice boys and girls who were his siblings.  But Braeburn didn't pay attention to all those nay-sayers.  He waited until he was of age, scraped all his savings together from odd jobs and went to circus school.

At first, his teachers and trainers despaired.  Braeburn's wings really weren't adequate for trapeze work.  Having fingers to grip bars and wrists turned out to be pretty important.  Braeburn faithfully visited Audrey in the hospital tent, though.

The elephants wouldn't listen to his commands during performance, they just wanted him to check them for fleas and other bothersome critters.  He wasn't really strong enough for the acrobatic acts.  But when Braeburn walked the tightrope, all who watched felt tears clog their throats.  He was magnificent.  He didn't even need a net because, at the end of his act, he could just float down gracefully, holding onto his umbrella.  Test audiences loved him.

On opening night, his parents and all the neighbors showed up, skeptical, but supportive.  Watching him balance on one leg way up in the air was like seeing that little bird from all those weeks ago standing on one foot for hours.  Braeburn's mother sighed in relief, "Braeburn wasn't odd. He was practicing!"

(The above is for all you other odd birds out there.  We're just practicing, right?!)
Posted by Elizabeth Seaver at 4:39 AM 4 comments: 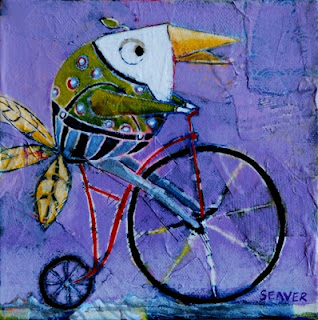 I spent yesterday morning up at The Workhouse installing my featured artist show for May.  The opening is this coming Saturday, May 12, from 6-9.  All my birdie friends will be there, except for Ferdinand.  He has found a new home, so he didn't get to make the trip with Frieda and the others.  I hope some of my human friends will join me, too.

My right hand woman, Lynette, helped put the show up.  Actually, it is more accurate to say that she was both my hands, since I tend to go helpless when trying to arrange my own work in a show.  I finally quit struggling and just let her make all the decisions.  It looks fabulous.

I hope anyone who is in the area will drop by.  The Workhouse is a unique art destination, formerly a D.C. prison, now renovated into working artist and show spaces owned and managed by Fairfax County in NoVA.
Posted by Elizabeth Seaver at 3:41 AM 3 comments: