New Paintings and a Birthday 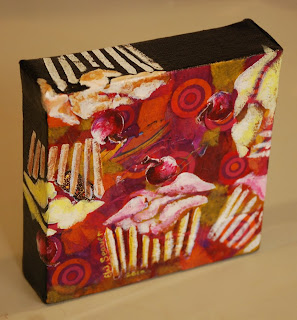 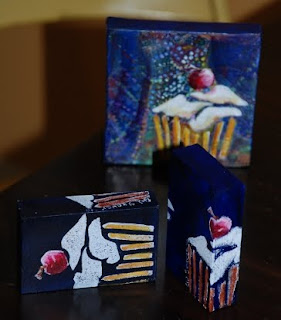 Cupcake Blocks (in front), 2 x 3, acrylic on wood
Cupcake on Stage (in back), 4 x 4 canvas, collage and acrylic
Anyone noticing a theme here?  It's a sweet blast.
And speaking of a sweet blast, today is my son's 17th birthday.  My life would be so dull without him in it.  He livens up any room.  He's my heart.
He got a new bass case from his parents (no, really....he asked for it!)  Happy Birthday, Matt!

Halcyon Days, acrylic, 18 x 36, by Elizabeth W. Seaver
I was having a hard time coming up with a title for this one.  As I ruminated (great word!) the word halcyon floated up from the depths, and I knew right away that that was exactly the feeling I was trying to capture in the painting.
According to Webster's New World College Dictionary, halcyon, used as a noun, means kingfisher, especially a legendary bird, identified with the kingfisher, which is supposed to have a peaceful, calming effect on the sea at the time of the winter solstice.  Bird, sea, winter (in the form of a big scoop of ice cream!) all seemed appropriate images.  Then it can mean any of a genus of kingfishers of S. Asia and Australia.  Kingfishers rock.  And then the last meaning spoke directly to the meaning of the phrase halcyon days.  It reads tranquil, happy, idyllic, usually with nostalgic reference to earlier days.
I remember blistering hot sun which made even the salty, bathtub warm Gulf Coast waters cool on my skin, and then, cold, sweet ice cream--the cherry on top of a day at the beach.
Posted by Elizabeth Seaver at 4:30 AM 17 comments:

Tangerine Seas, working title, collage/acrylic, 36 x 18
by Elizabeth W. Seaver
This painting would be the equivalent of an archaeological gold mine.  Excavate, and you'd find layers and layers of paintings underneath, some of which caused me to despair of ever growing up one day to be a painter.

I should just give this up and go dig ditches instead, said I to myself.  Anyone who knows me is now rofl, right?  Hard work?  Sweat?  I don't think so.

But, I am satisfied with the change and offer it up to you as my jazzier version of this image.
Posted by Elizabeth Seaver at 3:13 AM 21 comments: 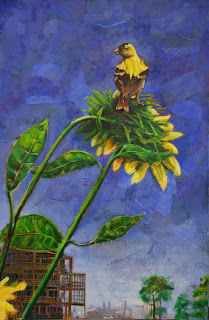 Seed Eater, collage/acrylic, 36 x 24, by Elizabeth W. Seaver
Here it was in February.  Don't forget to click on the image to get cozy with it.
When Aline (the taker of the original photo) saw the new version of the painting yesterday, she said, Elizabeth, where's my garden?
Oops.
For Aline this is not an idle question.  Her garden is her masterpiece, and it's a wild and wonderful and ever-changing canvas.  Several things came to mind as I scrambled to respond.
I lost it didn't seem quite right because it never really made it into the original painting either.
Right where you left it seemed sassy and didn't really address the bewilderment and loss I could observe in her demeanor.
All I could think to say was, It morphed.

Thank goodness she laughed.  Poor thing, she's used to artists.  She deals with us all day long and knows we're an odd breed.  (And it takes one to know one.)

I know we artists all have folks who keep our feet on the ground when our heads are in the clouds.  Thank them today.

Thanks, Aline!
Posted by Elizabeth Seaver at 2:32 AM 17 comments:

Crossing a Tightrope with Wings 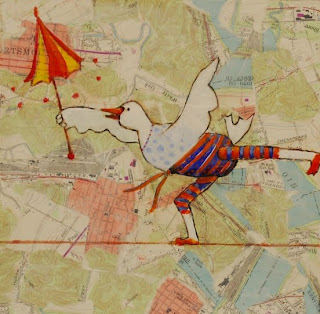 Tightrope I, WIP, collage/acrylic on wooden board, 8 x 8
by Elizabeth W. Seaver
Sold

At LibertyTown we get notes and checks in these cool envelopes recycled from old maps.  Sometimes I use it as my money collection envelope for the month; sometimes I turn it back in to the office to be used next month, but THIS time I tore it up for collage.

Someone asked me (as I was painting away at this and talking about my planned series about other birdies on a wire) whether it was cheating to cross a tightrope when you are able to fly.  As in, Where's the thrill in that?, I guess.  Now, I don't know about you, but crossing a tightrope when one is blessed with a generously round figure on spindly legs which one folds up and puts away when the real mode of transportation is in operation.....well, I just call that courageous!  And there is no need for that awkward net drooping below to spoil the view from above.  No, I think wings and tightropes are a perfect pairing.

When was the last time you walked a tightrope, with or with out a spiffy umbrella or an outfit that sparkles?
Posted by Elizabeth Seaver at 3:25 AM 13 comments: 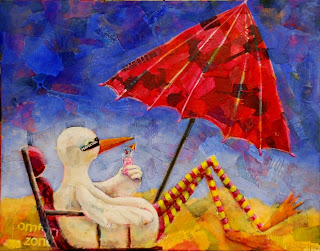 Comfort Zone, collage/acrylic, 22 x 28, by Elizabeth W. Seaver
sold
Andrew Finnie asked me whether I used a varnish with a UV protection coating in it.  The answer is yes.  I use a great Golden polymer varnish which you thin and brush on.  I coat my paintings twice.  It helps protect the colors in the collage and the paint from fading.  Keeping the paintings out of sunlight is always a good idea, however!  Thanks for the question, Andrew.  Go see his blog.  His work is darkly fantastical and so amazing, and his writing is, too.
I'm having adventures with my new camera, which has held up my posts somewhat.  I am finding a couple of things as I bump along with it.  One is that when the batteries are losing power, all manner of weird and puzzling things happen to interfere with picture taking.  (Note to self:  check battery charge first!)  The second is that if you put the bizarre messages which appear on your camera display screen into the Google search engine, some poor soul has had the problem before you and posted some kind of help for you.  The interwebs are an amazing thing!
Thanks for looking and please click on the image to enlarge it for a better perspective.
Posted by Elizabeth Seaver at 2:20 AM 20 comments: