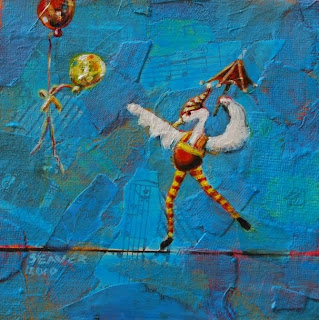 Tightrope Walker 6, collage/acrylic, 5 x 5, 2010
Elizabeth W. Seaver
If you keep track of details such as these, you may be wondering where T. W. 5 is.  She is, indeed, extant on a 6 x 6 x 3 shadow box, but the photograph of the painting did not turn out well.  I'm going to have to retake it.  Elmer Banks, eager for his presentation, wanted me to tell you his story.
* * * * *
Elmer Banks  was one of the class of performer which made those in circus management, rapacious eyes trained on the bottom line, rub their hands with glee.  Daring, handsome and graceful, he performed with an irrepressible joy, commanding the rapt attention of the circus-going crowd.  With a nod to his popularity and box office draw, everyone under the big top just called him Banks.
Watching him from way below, one might think he had it all, assuming that the source of his buoyant spirit.  But, as is often so when we make quick judgments from shallow observation, the opposite was true.
He had been a promising ballet student from a small boy.  His parents loved him dearly and encouraged his dreams.
However, just three years before, his father had flown into an airplane engine on a cross country business trip.  In a strange twist of fate, that same airplane, making an emergency water landing, also killed his mother who had taken a short cut, late to open her dental office for her early morning patients.
Banks had a hard time of it.  He endured cruel whispers from other young fowl.
Two birds with one stone, they snickered slyly.
He had many doting aunts and uncles who cared for him in succession and made sure he finished school.  His days as a dancer seemed so far in the past as almost to have happened to another bird.
At eighteen, Banks couldn't wait to get out on his own.  When the traveling circus came to town, he threw himself into the audition and was hired on the spot.  Training hard, he hoped one day to be chosen to walk the tight rope.
Banks worked from dawn until long after sunset.  In his spare time, he followed behind the elephants, tigers and horses sweeping up poop.  He shoveled great mounds of it into piles for the local farmers to haul away for fertilizer.  His long wing span and stilt-like legs came in handy when it was time to move the circus from town to town.  Within the year, management deemed him ready for his dream job, and Banks put down his poop sweeper for good.
Banks certainly loved dancing on the high wire.  And it was true that the affection of his new circus family had begun to ease the lingering sadness caused by the death of his parents.  Lately, however, close observers had noted that his performances were shimmering with an extra, unaccountable sparkle.
Her name was Darla.
Posted by Elizabeth Seaver at 5:45 AM

Do I see a book in the offing? Beautiful painting. Love the colour. And the story is wonderful.

I'm enjoying catching up with your work (been away on vaca) - and LOVED Put Upon!!! and this story of the little circus performer and his trials. I know he'll have a happy ending :)

I love the natural humor of it all.

Love it! Both the painting and the story of course. :) You are an artist of many layers!

Wonderful story and painting as usual Elizabeth! looking forward to the book... ;)

I agree, love both and am waiting now to see how it all turns out

Hey great pose on the balancing bird, nice contraposto 9if that's the word?

And your writing is like Hemingway but with flavour

A fascinating story! It adds so much meaning to your wonderful painting.

As a newcomer, I've taken some time to go through your images and posts and feel transported! Delightful images and exquisite language. I see many before me instantly thought "children's book." I love your inventiveness and the wonderful personalities your characters have. Your work gives me an instant lift!

Ohhh! I am so glad you found me cuz I just LOVE your work! Can't wait to see and read more.

Oh my goodness! Both of these are so good. Love those backgrounds with the music barely showing. And the story is absolutely delightful! When are you publishing?

Very fetching! What a wonderful series you have going. I'm going back to see the earlier ones.

Hi,
thanks for stopping by at my blog...I am impressed to see your collection of works..they are refreshing and different...the compositions and ideas are brilliant

What lovely comments from you all. You have no idea what your encouragement means to me. Thanks for your visits and the contributions you all make to the world of art and artists. Cheers!

Have you found Robert Burridge and his circus theme? Yours is delightful. At one time I lived in Hampton VA for many years so I know Va. on the east coast.

Hi, Nancy: I noticed you had VA connections when I went to your site. Thanks for stopping by to comment. I'll have to check out Burridge's circus paintings. Thanks for the tip.