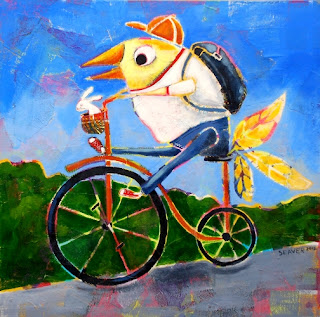 She decided not to turn around at that moment to give Asa her dirtiest look.  She had to keep that bike on the path and concentrate on not losing her lunch.

As a kit, she could just hide at the bottom of the basket when the going got rough, but now that she'd gotten so much bigger, there was nothing for it but to hang on tight to the weaving with her claws and pray that Asa didn't say, "Look, Ma, no hands!"

He already had taken his feet off the pedals.

If Asa had to clean pellets out of his bike basket at the end of this ride, it would not be her fault!


Posted by Elizabeth Seaver at 6:55 AM

I love your bicyclists! I have two bicyclists myself at home, and at times, it feels like your stories are about my guys.
Love all the colours.

Thanks for the chuckle and the eye candy.

you are terrific...love the original art and the stories written for each piece are wonderful, they are the kind of stories you would read again and again enjoying them equally as much, and laughing out loud each time.

This Birds on Bikes series has me grinning from ear to ear! SO creative and fun with equally entertaining stories. Wonderful!

I've missed a few I see. I love the series, very sweet