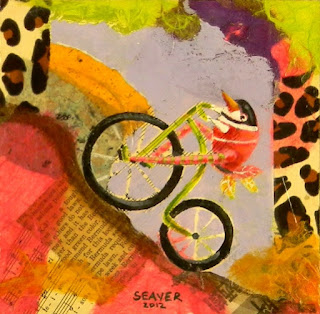 This was by far the dumbest scheme ever, Polly thought to herself as she pedalled at a snail's pace towards the rocky crest with the mountain biking club. Well, she was technically behind the mountain biking club rather than with them--way behind. I mean, in order to meet people, you actually had to talk to them, right? So far, when they'd stopped for breaks, she'd sweated, gulped, panted, tried to look nonchalant, chugged water and limped around trying to ease her charley-horsed muscles, but she'd not met one person or been capable of saying a single coherent word.
Back again in the saddle, which she noted was getting mighty sore, she began to be afraid that it was possible to pedal so slowly as to roll backwards down the mountain. She distracted herself by recounting all her efforts to make friends since she moved to California: a sky-diving fashion show (the heels were a daring choice of footwear, but hadn't actually been a great idea on the landing), extreme beach bathing (you haven't lived until you've gotten raging sunburn wearing a thong--for a time, she achieved a certain notoriety as That Thong Girl, but she hadn't actually made a single friend for her pains,) then there was the Saturday she went skating at Venice Beach. She felt grateful that her scabs had finally gone away, even though her technician winced when Polly went to have her legs waxed.

She looked up to see whether the top of the hill was any closer and blinked. Was someone actually waiting for her up there? And could it be the best looking biker in the bunch...ho, boy, was he adorable! She forgot her aching legs and burned out lungs, her dry mouth and her empty, complaining stomach, sat up straighter and accelerated to caterpillar pace to meet him.

Posted by Elizabeth Seaver at 1:07 AM

oh... what did he say? You got me sitting on the edge of my seat!

Cathy, maybe that is what he said: "You've got me sitting on the edge of my seat...." I like it! Thanks for your visit!

I don't know if I like your art or your stories more. :) Love your stuff Elizabeth - makes me happy.

Hi, Karen! Thank you so much. What a nice thing to say!

Wow, flattered that you used my name. She is so like me too, taking on impossible tasks and being accident prone. Are you psychic? Hamish McGregor shouted "Och aye, you're a brave wee lassie, Polly, determined to get to the top o this wee hill. There's a wee dram o whisky a waiting for you". Sorry couldnt resist adding this.

awwww that is one adorable wee bird on a bicycle

Polly: Yes, it is all about you on that wee bike. A dram of whiskey, why didn't I think of that! Exactly what she needs for sore muscles, a gorgeous bird on a bike and whiskey! Thanks for playing.

Hi, Celeste: He was glad to see her, right? I am so glad you thought of that. My thoughts were running more to another calamitous ending for one of her ploys to meet people....Thanks for stopping by!

Is it possible to purchase this? Please email me at abm134@msstate.edu