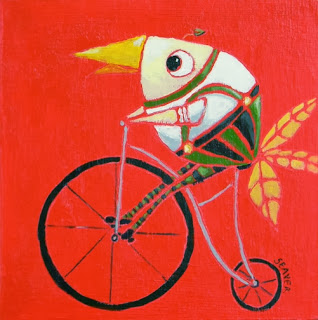 Had he known what a fraught, frightening, freaky Halloween awaited him, Porter would, no doubt, have asked his mother, his father, or even his slightly patronizing, sometimes mean, ten year old sister to accompany him. But he didn't. And even worse, he forgot any kind of candy receptacle. Lucky for him, his "which came first, chicken or egg" costume had capacious pockets. And when those filled, there was plenty of room left between what was Porter and what was stuffing.

But then he thought of something. "I hope I sewed the elastic around my legs tight enough. Hmm. Maybe I should stick my candy all the way into the top of my tights. Yes, that's it." Reassured, he immediately stopped thinking about the time his birthday pinata leaked all that candy--a good thing at a birthday party, but not tonight. Tonight there were ghouls and goblins, princesses and pirates, Captains Underpants and Supermen who would scoop up rogue candy, even if they knew the source of the leak.

Nothing could have made Porter turn his silver bike around and go back home, though he should have, because what happened that Halloween eve changed Porter forever.

Now it's your turn.

Posted by Elizabeth Seaver at 1:54 AM