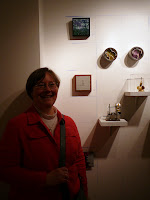 My work was WAAY over my head. It is the top piece on the wall there. 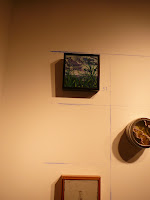 Thursday night, December 11, my family and Ariel, who also had work in the show, splashed our way up I-95 to Alexandria to see our work at the Torpedo Factory. The gallery was surprisingly small, but that was just right for the showing of small works that it housed. In the days before the opening, I tried to imagine what the show would look like hanging on the wall. I knew already that about 600 works had been submitted from the show and that about 240 had been selected. I sort of assumed that they would be jammed in with no space around them and would be hard to identify separately.

I was so wrong! Immediately, I was impressed with the griding on the wall, in what looked like a blue pencil. You might think that it would give a regimented look to the place, but the pencil markings were faint enough and the groupings of work were so interestingly chosen. I talked to Mary, the coordinator of the show, and incidentally, the contact we had with the Torpedo Factory for their traveling show in the LibertyTown Main Gallery in September. She said that her assistant had created the postcard for the show in a grid which had staggered boxes filled with the work. It gave her the idea to draw a grid on the walls in their gallery to hang this show. It was stunning.

The work came from 30+ states and 6 foreign countries, including Israel. In the main, work was innovative and provocative. It was inspiring, and I am so glad we went.
Posted by Elizabeth Seaver at 4:46 PM

It is great to see pictures of you standing with your work!!! Congrats again! the blue grid is very interesting- reminds me of construction rough outs and a stunning contrast to the finished peices. I am SOOOO in the box- all that came to my mind when thinking about this call was a cube- very interesting to see what others submitted and what was chosen!!
See you soon!
Elizabeth