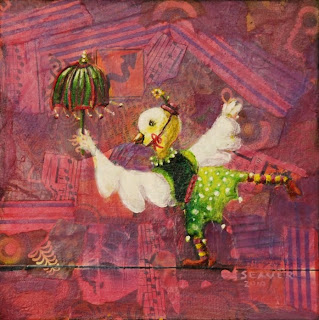 Tightrope Walker 5, Marla, collage/acrylic, 6 x 6
Elizabeth W. Seaver
Marla eased out onto the high wire and moved into her first pose.
She checked out the evening's crowd.  It seemed to her that every seat was filled to double capacity.  The heat from their bodies rose up to meet her where she perched nearly at the top of the tent.  When had this stopped being fun and begun to be a job?
Marla had felt it keenly as she watched her daughter, Darla, and her friend, Banks, performing tonight.  They glowed with life and energetic youth and....something else.  What was going on there?  Marla wondered.
"Best put that aside to think about when I'm not five stories in the air," she said firmly to herself.
She hoped her lips hadn't moved as she ruminated.  She was still amazed that the audience could see her mouth move from way down there.  But it had been mentioned by her boss in her quarterly review.  It would not do for anyone to think she'd gone 'round the bend.  Good grief!  She wasn't even forty yet.  She was seasoned,,,skilled...a bird that fledgling performers could look up to and learn from.
Marla was no stranger to the dangers of circus life.  She had come from a long line of circus workers.  As she was growing up, there was never any doubt in the minds of her family that Marla would follow in their footsteps.  When she was twenty, she'd fallen in love with an elephant trainer and not too much time had passed before she'd laid an egg--her Darling (Darla, for short).
But, as is true even in the happiest of stories, tragedy struck.  No one really knows what happened that day so long ago now, but Darla's father met an untimely end when an elephant he was working with sat down on him.  His squawks for help went unnoticed, and soon it was too late.
"Extinguished in the prime of his life," Marla always sighed as she told the story.  Darla rolled her eyeballs behind her mother's back, in the way of teenagers when hearing an oft repeated tale.
And so, there had been no question when Darla was half grown that she, too, would continue the high wire legacy.  It was beginning to dawn on Marla, however, that Darla was not a happy bird.  Her mother knew she had dreams of dancing ballet, but had discounted it as a passing fancy.  Just like her own mother had when Marla had announced her goal of becoming a librarian.
"Well," Marla mused. "Perhaps the time has come to..."
The music swelled, surprising Marla, whose thoughts had wandered so far afield.  It was time for her split.
"Oh, dear, I'm off the beat!"  she panicked.  Quickly she slid down to the wire.........and toppled right off.
"I'm too old for this shit," she said as the ground rose up to meet her.  This time she was sure her lips had moved.  And sound had come out.  And everyone had heard it.
She opened her wings, gave a mighty flex and gently landed on the straw covered floor.  The crowd clapped in appreciation, and Marla sketched a sassy bow.
She marched off stage and into the manager's office, flinging open the door.
"I quit!" she announced.
Posted by Elizabeth Seaver at 2:21 AM

Hi, Kathy: Thanks so much for coming by!

Maybe Marla and Greg can tackle the library program together! :)

Hey! What a good idea. How does Greg feel about being seen in public with a four inch tall, former tightrope walker, bird lady in striped stockings--much less being her study partner in library school!!??

I'm glad you like Marla's story! Thanks for your visit.

Great painting. Could the author being including some biographical detail. Did she make such a decision at one point? Of course I am beyond intrigued.

I love it all! The painting is wonderful, and you captured a perfect sense of "balancing" not so easy to do in paint! And, the story is delightful - real, honest, thought provoking and charming. Thanks!

Judy--what nice things to say. I appreciate your visit and your encouragement.

I love the painting and the story is icing on the cake!

Thanks for stopping by, Vicki. I'm glad you like Marla.

I love this group of pieces!! great color and whimsey!! Didn't know that you were such a story teller!!! sUCH fUN!!!!

Hi, Elizabeth: The stories are bubbling up from somewhere. The characters whisper them in my ear, really!

Thanks for the great comments.

Wonderful! Love the picture and the story. Thanks for the follow too!!

Hi, Linda. I love your blog and and so glad you've followed me too.

Great tale, great image to bring it all home! love the background and the detail!

What a nice thing to say. Thanks so much for your kind words and your visit to my spot!

She is great. Every Chicken should know her sh*t and just how much not to take.

Ha! I love Marla's story. The background collage is great.

If 'specially made for you this week!

But, I came by to see your art - and as usual I am not disappointed. The joy that you put into these pieces is so evident. Thank you for continuing to inspire me with your whimsical humor, fun compositions and great color choices. I have to admit that I laughed out loud when I saw the 'winding road' sign. And that was even before I read the story. Thanks for that.

I quit! lol....brilliant--love the image

Elizabeth, your work always delight me and brings a smile to my face...love the story too!

Love your artwork and stories!!! You are very talented!!!

Thank you for stopping by and for leaving such kind words...

I read your stories, every word, and they make me smile, laugh out loud and sometimes feel a bit of sadness = what a great story and painting. You really SHOULD be saving and collecting these in preparation for a book about all your lovely circus performers. (I knew Marla would be okay because - well, she has wings - and will look forward to her next adventure.)

I totally agree with RHCarpenter. You could sell them as apps and become a bazzillionaire overnight!

Really enjoyed all three stories, and love the art work, such a quirky and individual style.

The painting and the story is so colorful, fun, and very engaging. Love your work!

I love your style with the collage and painting. And your profile picture makes me laugh, too, its really fun!