Sir Walter in the Reeds 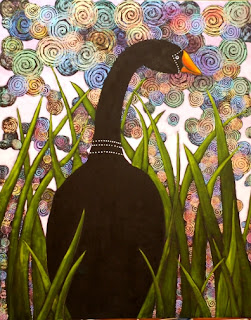 When Walter's mate had been alive, they'd danced every day.  Walter and Agatha loved to dance.

If the weeds at the bottom of their pond were imbued with an especially tasty crunch that day, the two would dive deep to the bottom, grab a mouthful, then rise to munch and dance on the surface of the water.  Necks twisting this way and that, they'd sail in a circle, feet pumping to lift them up, with a wing assist.

If one of their many offspring had been especially clever, Agatha and Walter would show their appreciation for its wit or accomplishment with a double pirouette, wings flapping and tails shaking.

They often hosted parties to celebrate the magnificent sunsets on their bank of the pond.  Couples came from all over the marsh to shimmy and wriggle and writhe.

Now, Walter's heart weighed as much as that stone he'd tried to move when Agatha wanted to place their nest just there.  He'd been so lonely he just couldn't dance.  He could only sit in the reeds and remember his graceful mate.

Just then, the reeds whispered.  They writhed and shimmied in the early morning light.  Walter listened closely.

When they quieted for a moment, he bent his long neck down towards the marsh grasses. "Excuse me.  What did you say?" he asked, being a polite sort of bird.

Walter's heart eased, not quite so heavy as before.  He closed his eyes.  He took a deep breath.  He swayed gently at first.  In response, the reeds swished and twisted.  Walter shook his head and bobbed it up and down.  He shimmied and wriggled, sitting there amongst the companionable reeds.

Posted by Elizabeth Seaver at 4:20 AM

You have almost brought me to tears! AND, of course, love this painting.

Your story reminds me of the lyrics to Josh Groban's "To Where You Are." Sob...but comforted at the same time.

Sir Walter is quite impressive! I imagine he takes over a room with his presence and his size. I also love his bittersweet story. You are such an artist on so many levels!

Beautiful story and art. My mind shortened the title to Sir Walter Reeds it wasn't until I looked again I saw the title the way you wrote it.

Love this new series! The solid colored birds look so great against your trademark swirls. And, of course, the story is absolutely wonderful!

I can just imagine him listening in the weeds, the size of this painting must be even more impressive in person.