With the Greatest of Ease 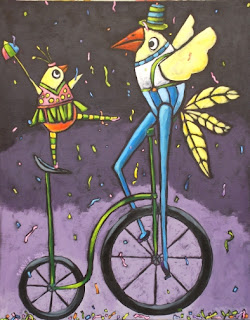 With the Greatest of Ease, acrylic, 24 x 30
Elizabeth W. Seaver

Clythus and Beatrix fell in love on a bicycle.

At first it was just a job.  A dream job, you understand, but a job, nonetheless.

All Clythus had to do was to keep the bicycle balanced while riding backwards so the little starlet didn't fall on her feathered head.  They had been hired individually by the circus manager, Mr. Hammond, and had been paired to perform in the pre-show act, entertaining customers who arrived early under the big tent.

I could almost do this in my sleep, Clythus thought to himself, stifling a yawn.

He really was just a glorified warm-up act, and hoped one day to thrill audiences on the high wire.  For the first several nights they'd been performing in Toledo, while he'd pedaled, he'd made a grocery list, thought of all the people whose texts he needed to return, and tried to remember where he'd put his Kindle.

While he mooned, Beatrix pirouetted, kicked, jumped and generally made the audience swoon with her cuteness.    Clythus, mentally occupied with planning a more efficient way to pack his trunk for the move to Akron, suddenly noticed a bobble in the act.  Beatrix tilted towards him, nearly poking his eye out with her adorable umbrella.

Instinctively, he threw his wing forward to steady her on the narrow bicycle seat.  Whoa there, little lady, he said in his best John Wayne accent.

Their eyes met and held.

Thank you, Clythus, she breathed.  I should have wrapped my feet before the show.  My bunions ache something awful.

And that was that.  Clythus fell.
Posted by Elizabeth Seaver at 4:18 AM

Awwwwwwwww! I love this one! Both the painting and the story. You are just too good.

Thanks, Anna, for your kind comments and wonderful support!

Love it, an instant smile!

Hi Elizabeth, I am really enjoying these. Their stories are so sweet, leaves me wanting to know even more about them! Karen

This is so cute, I love the painting and the story :)

Oh my gosh....you bicycling birds series is incredible! Really enjoyed all the stories and paintings. I just went through them...

These wonderful paintings and their accompanying stories could make for a lovely book.