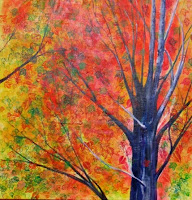 A Change of Scenery is a painting that I really enjoyed working on in September of last year. I started with muslin which I covered with three coats of gesso. Then, able to work flat on my table, I used my hand carved soft blocks, and printed all over to create the fall leaves. I have used this same photo for at least two other paintings because it is so beautiful with its mixture of oranges, reds, golds and greens. The photo has a white birch in the foreground, and I had painted that birch in the other pieces. But, this one, I liked as it was with only the dark tree.

The more I lived with it, though, the less I liked the starkness of the cool yellow I had used so genrously. I wanted to warm the painting up. Finally, during repaint and refurbish season (going on now!), I have gotten it back off of the wall to play with. By now, of course, I have stretched it, so using my blocks on it is not as easy. For the changes, I used brushes instead.

I began to add warm reds and oranges and golds painting over or around the prints and shapes I had made earlier. Then I began to paint in a warm blue mixed with titanium white to create the open places you see through trees to the sky. I paint instinctively when I get going --it's really an exploration. I already don't like what is there, so it frees me to do whatever I think might make it a better painting.

I think I am done with it now--at least for this refurbishment season! 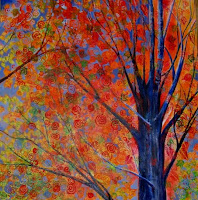 Change of Scenery, acrylic and printmaking, 28 x 29
Posted by Elizabeth Seaver at 11:42 AM

Oh I love all of that new Warmth!!! Have you been outside lately???? that 65 degrees wa just a cruel tease!!!!!!
Hugs!
Elizabeth

The transformation is amazing! I liked it before but it is even better now. Great eye Elizabeth!