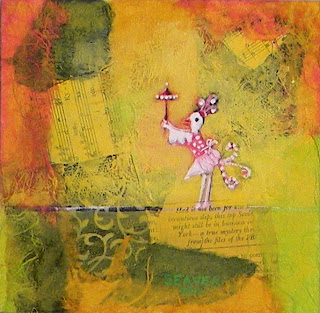 Ooo, her tights were sagging around her knees and ankles. "I hope no one can tell from the audience," Bettina thought, disgusted. Her best pair were in the wash, and she'd had to borrow these from the Soaring Smiths' youngest daughter. Shondra Smith was round where Bettina was lean and straight where Bettina was round, and truth be known, should have gotten rid of this pair already since it had a ladder that ran right up Bettina's back end. At least it had made it easier to accommodate Bettina's spectacular tail feathers.
Not only was Bettina the tiniest tight rope walker at the circus, but she was also the owner. Tonight she almost missed her performance, making sure all her employees greeted the guests properly and then double checking their math when the ticket booth closed for the night.
Truvy the Bearded Turkey, who had been at the circus as long as Bettina, fussed at her friend nearly every night, "It's time for you to give up that high wire act. Pardon me for saying so, and you know I only have your best interests at heart, but you are getting long in the beak for that kind of work."

In her heart, Bettina knew Truvy spoke the truth. But Truvy never ventured out on the high wire, much less danced lightly along it way up in the air, feeling the spring of it under her weight, getting that regular infusion of adrenaline as she perspired in the spotlights. No, giving up all of that was not so easy. It had been her dream since chickhood.
Retirement loomed like a bad case of avian flu in her future, but tonight, she was on. Tonight, she took a deep breath, forgot about her baggy stockings, ignored Truvy's admonitions and gave herself to the act. She twirled and balanced, spun and jumped, tiptoed and back flipped, and the audience cheered. Ah, there was the music of her life. And Bettina knew, she'd be back on the high wire again tomorrow night, heart light in baggy tights.
Posted by Elizabeth Seaver at 2:50 AM

Thanks for serving up a smile this morning, Elizabeth! Beautifully conceived and done.

Awesome! I love the stories that accompany you art.

Go Bettina! I hope I remember her philosophy when I get "long in the tooth." :)

Wonderful story and image! I feel like I'm right there in the audience under the big top.

I'm glad you smiled at Bettina, Dean. Thank you so much for visiting!

Hi, Crystal! It was great to see your blog after too long. Thanks for coming by to visit mine. I'm glad you like the stories.

Hi, Laura. Thank you so much. Thanks for your visit. I was so glad to find your blog.

Hey, Anna. I know you will. And if you forget, I'll remind you!

I'm glad the big top feels like home, Katherine. Maybe you have a bit of a tightrope walker hidden inside you! Thank you so much for stopping by.