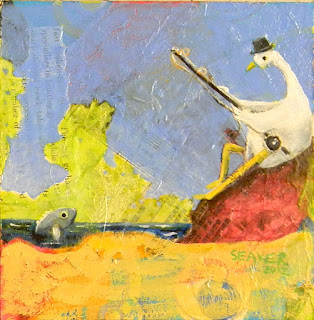 Catching a Fish Spoiled John's Whole Day
collage/acrylic, 6 x 6
Elizabeth W. Seaver
Sold
John used the traditional fishing methods for birds of his ilk during his weekly feeding fishing expeditions. But on the weekends, he liked to take rod and reel and colorful flies he tied himself to sit on a rock in the river and cast and cast. It was a little like meditation. His wing flashed back and forth in a rhythmic, flicking motion which served to sooth his ruffled feathers and eased his worried mind. Yes, John was a worrier. Once he stopped worrying that the kids would get eaten by big fish or fresh water gars or turtles, then the big expenses would start. They all wanted the latest l-pads and fancy b-uggs. They weren't happy just to eat dragonflies and waterbugs and wear regular webs like he did when he was a boy. Today's -lings! If he didn't love them so much, it wouldn't be a big deal. But he hated to see them wearing used outfits from Featherwell's Two Times New. Mabel said he was too soft-hearted, and he supposed that was true.

But when he was fishing, Mabel's softly chiding voice faded away, and he forgot that all week long he was nibbled to death by ducks. He only saw the sparkling water and felt the warm sun on his shoulders. Unfortunately, and it was a big downside, sometimes he actually caught a fish. It ruined the rhythm, zapped the Zen and otherwise, spoiled his whole day.

Sometimes, like today, he quick pulled in his line when a fish jumped or struck at the water. Often, they felt like talking, so he listened and advised on the best places to go for sushi, that sort of thing.
It was a two-edged sword, this making friends in the work place.
Posted by Elizabeth Seaver at 1:09 AM

Your posts are a delightful way to start the day!

What a lovely compliment! Thanks for coming back day after day!

HAHA! You just tickle me.

Wonderful, and observant. Fish do like attention, don't they?

Hi, Katherine. In my experience, fish do like attention and get much more than they deserve! Thanks for coming by!

The paintings are brilliant Elizabeth and the stories delightful! I enjoy reading them so very much. This one reminded me of my Dad who fished often when travelling as a salesman. He would park by a river and haul out his books and his fishing rod too so he cold work in the outdoors. The fishing rod i suppose validated his being there. What better place to be! But catching a fish was a problem for him so he never bated his hook!

Ross, Hello! Yep, that was my dad. He really just loved standing hip deep in the river casting his fly rod. I was thinking of him when I painted it. I thought he was the only dad who did that!

haha brilliant - love your collage work, would love to try collage some time - I should stop talking about it and just do it!

Hi, Sharon. Thanks for joining my blog. I just went to yours and saw your impressive watercolors. Love the birds, as you may know! Thanks for stopping by.

Collage is a blast. And the nice thing is, you can still use it with your regular style of painting. You may have to play around a bit with the kind of papers and the thickness of paint to see what works best for you.