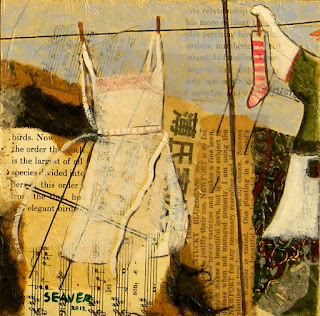 Caroline couldn't remember when she'd stopped being Caroline and become 'Line. She hated having such a lazy name, just as if your mouth didn't wake up until you got to the end of it. What about a cute nickname like Caro or Carrie? She really wished everyone would just call her Caroline. Why not? Why did her parents name her Caroline if they weren't going to call her that?

But, she had discovered over the years that it was difficult to change your name. She had tried when she was little--a couple of times. Once, she asked everyone in her family to call her Liza, figuring if they called her Liza, then everyone else in town would follow suit. But her mother and father, brother and sister just laughed. Then, she thought she'd liked to be called by something beautiful like Opal or Pearl or Ruby, but no one went along with that, either.

Now, she dreamed about the day she turned eighteen. On that day, she was going to the courthouse to change her name, officially. And if she had to refer to herself by her own name for the rest of her life, she was going to make everybody call her by it!

As she clipped the laundry to the 'line, she pondered the problem, My new name has to be perfect because it will be mine forever, so who will I become? She had to think hard and fast; she only had two more years to get it right.

Posted by Elizabeth Seaver at 4:26 AM

My niece decided a 2 or 3 years ago to start going by her middle name. It's hard to remember! She is still Heather to me. :)

I so relate to name changes!! I love this thoughtful story....

Great story; love the movement in the collage.

I like your collage and the story that goes with it. Thank you for finding my blog and leaving the nice comment.

Hi, Anna--yeah, I tried to get everyone to call me Eliza (note the similarity to my story???) but nothing doing! People are so rigid!

Hah! Susie, I didn't even think about that when I began to write, but I'll bet it was in my subconscious!

Thanks, Pam. I do love that about collage, and I did work especially in this series to let more of it show. I appreciate your coming by!

Hi, Janelle. I always love to find inspirational blogs. I'm glad you like my collage and story. I hope you'll be back!

Hi, Sonia: My story about Caroline is based on my own experience of wanting a more exotic name. It is hard work to become a new person and takes everyone else's cooperation, doesn't it??

Thank you so much for your kind comments about my work.