They Rocked the Joint! 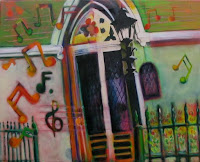 Today's piece is one that got an overhaul this week. The background was too strong so that the "music" was lost, and since this is called Choir Practice the music is important! And, as you can see, the choir actually made the walls jump and shift!

For several summers, I taught an art component of a music camp that our downtown churches collaborated on for several years. I have such respect for the music staff at this church, so this is my tribute to them. It is also an old church, so I wanted to show the facade.

I experimented with using part of a xeroxed photo I had taken of the church and painting the rest of the image around it in oil. I started with a wildly colored patchwork under-painting, then painted over that with a mixture of cad red light/white to reveal the notes by painting negatively. I really liked the way the green and pink went together, but it was too wild and unresolved-looking. The biggest change I made in this pass at it is that I toned the walls of the church down with a greenish yellow/white. Now, I feel as if I made the musical notes and architecture more the focus of the painting, rather than just the COLOR!
Posted by Elizabeth Seaver at 1:37 PM

I love this. Painting to reveal the notes works beautifully.